This is part of a series of posts I have written about web scraping with Python.

Yea, yea, I know I said I was going to write more on pandas, but recently I've had a couple friends ask me if I could teach them how to scrape data. While they said they were able to find a ton of resources online, all assumed some level of knowledge already. Here's my attempt at assuming a very minimal knowledge of programming.

We're going to be using Python 2.7, BeautifulSoup, and lxml. If you don't already have Python 2.7, you'll want to download the proper version for your OS here.

To check if you have Python 2.7 on OSX, open up Terminal and type python --version. You should see something like this:

Next, you'll need to install BeautifulSoup. If you're on OSX, you'll already have setuptools installed. Let's use it to install pip and use that for package management instead.

In Terminal, run sudo easy_install pip. You'll be prompted for your password - type it in and let it run. Once that's done, again in Terminal, sudo pip install BeautifulSoup4. Finally, you'll need to install lxml.

Now that we have the packages we need, we can start scraping. But first, a couple of rules.

For this example, we're going to use the Chicago Reader's Best of 2011 list. Why? Because I think it's a great example of terrible data presentation on the web. Go ahead and browse it for a bit.

All you want to see is a list of the category, winner, and maybe the runners-up, right? But you have to continuously click link upon link, slowly navigating your way through the list.

Hopefully in your clicking you noticed the important thing though - all the pages are structured the same.

In looking at the Food and Drink section of the Best of 2011 list, we see that all the categories are a link. Each of those links has the winner, maybe some information about the winner (like an address), and the runners-up. It's probably a good idea to break these things into separate functions in our code.

To start, we need to take a look at the HTML that displays these categories. If you're in Chrome or Firefox, highlight "Readers' Poll Winners", right-click, and select Inspect Element.

This opens up the browser's Developer Tools (in Firefox, you might now have to click the HTML button on the right side of the developer pane to fully show it). Now we'll be able to see the page layout. The browser has brought us directly to the piece of HTML that's used to display the "Readers' Poll Winners" <dt> element.

This seems to be the area of code where there's going to be some consistency in how the category links are displayed. See that <dl class="boccat"> just above our "Readers' Poll Winners" line? If you mouse over that line in your browser's dev tools, you'll notice that it highlights the entire section of category links we want. And every category link is within a <dd> element. Perfect! Let's get all of them. 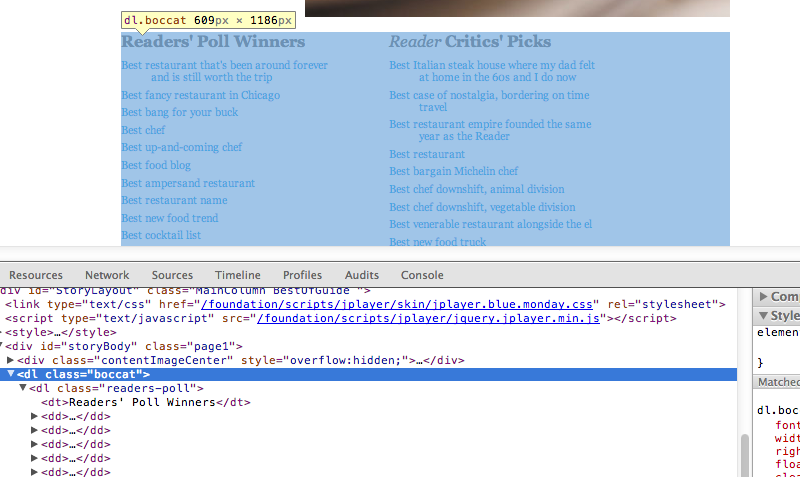 Our first function - getting the category links

Now that we know we know the <dl class="boccat"> section holds all the links we want, let's write some code to find that section, and then grab all of the links within the <dd> elements of that section.

Hopefully this code is relatively easy to follow, but if not, here's what we're doing:

Our second function - getting the category, winner, and runners-up

Now that we have our list of category links, we'd better start going through them to get our winners and runners-up. Let's figure out which elements contain the parts we care about.

If we look at the Best Chef category, we can see that our category is in <h1 class="headline">. Shortly after that, we find our winner and runners-up stored in <h2 class="boc1"> and <h2 class="boc2">, respectively. 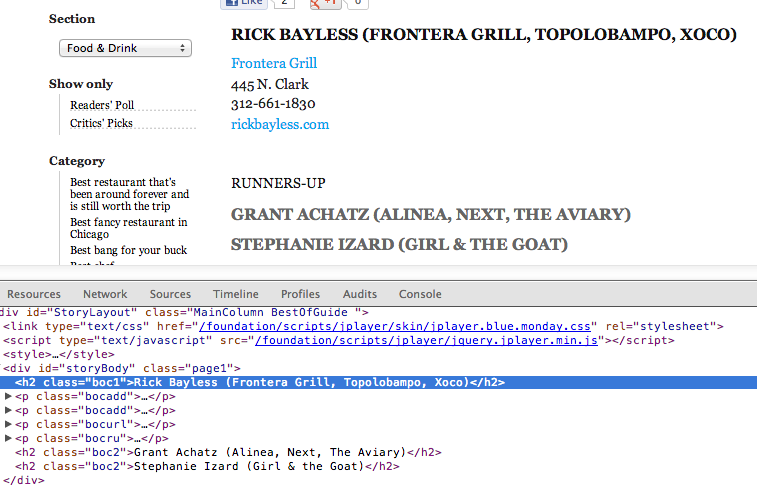 Let's write some code to get all of them.

It's very similar to our last function, but let's walk through it anyway.

As mentioned in the previous section, lines two and three of our second function mirror lines in our first function.

Imagine a scenario where we want to change the parser we're passing into our BeautifulSoup instance (in this case, lxml). With the way we've currently written our code, we'd have to make that change in two places. Now imagine you've written many more functions to scrape this data - maybe one to get addresses and another to get paragraphs of text about the winner - you've likely repeated those same two lines of code in these functions and you now have to remember to make changes in four different places. That's not ideal.

A good principle in writing code is DRY - Don't Repeat Yourself. When you notice that you've written the same lines of code a couple times throughout your script, it's probably a good idea to step back and think if there's a better way to structure that piece.

In our case, we're going to write another function to simply process a URL and return a BeautifulSoup instance. We can then call this function in our other functions instead of duplicating our logic.

We'll have to change our other functions a bit now, but it's pretty minor - we just need to replace our duplicated lines with the following:

Putting it all together

Now that we have our main functions written, we can write a script to output the data however we'd like. Want to write to a CSV file? Check out Python's DictWriter class. Storing the data in a database? Check out the sqlite3 or other various database libraries. While both tasks are somewhat outside of my intentions for this post, if there's interest, let me know in the comments and I'd be happy to write more.

Hopefully you found this post useful. I've put a final example script in this gist.